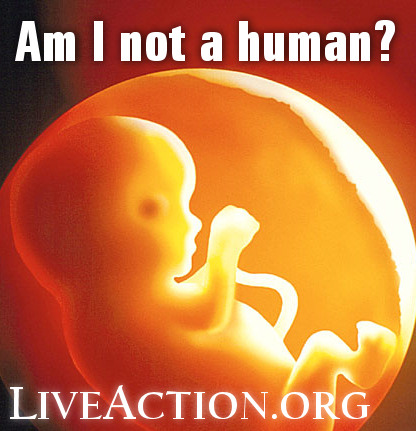 At Live Action’s channel at YouTube, there are over a thousand comments, both critical and supportive. One in particular caught our eye this week and deserves a response. A viewer offers several reasons not to love the unborn child.

“Let’s see, unborn humans are incapable of feeling pain, incapable of rational thought, and they can not object to abortion. Born humans have instincts, they want to go on living, and that is what makes it fundamentally wrong to kill a born human. A fetus is totally incapable of wanting to live so they aren’t human in the sense they don’t have a “soul” like we do.”

If we consider that science tells us when human life begins, at fertilization, those of us who understand human dignity need no further proof that this life deserves equal protection to be defended from any acts of intentional, physical harm. Unfortunately, not everyone understands dignity and value of the human person. For this reason, we do frequently see arguments for abortion, like those above, that are offered from a strictly scientific vantage point. Do they hold water? Let’s take a look.

This is actually not true. An unborn child can feel pain as early as 8 weeks gestation. By week 20, the child is even more vulnerable to pain than the average adult would be. Further, the argument that we should be able to kill someone who is not feeling pain would mean that anyone who is unable to feel physical pain could legitimately be killed. This would include many quadriplegics or people paralyzed by coma or, perhaps, even people in a state of drunkenness. Should law enforcement officers be able to physically attack people they’ve arrested for drunkenness? Of course not. Neither should anyone else be considered “fair game” for physical attack, and even murder, based on ability to feel pain.

Argument #2: Unborn humans are incapable of rational thought, and they can not object to abortion. Certainly, many born persons would also fit under this distinction, including any person who happens to be asleep. This criterion, in practice, would be an argument for killing many thousands of people in mental institutions, or even people who live happily in the world with conditions like severe Down Syndrome. One’s inability to rationally object to his own murder is not a license to kill…but could manifest into a legally protected license to kill if the above argument were to become popular. Additionally newborn babies are not able to suddenly engage in rational thought the moment they are born, should killing them be legal?

Argument #3: Born humans have instincts, they want to go on living, and that is what makes it fundamentally wrong to kill a born human.

Not all born humans have this instinct. Many people who suffer from depression find themselves wanting to commit suicide. The desire to commit suicide is something that should be treated with compassion and a call for life. If your best friend told you he wanted to commit suicide, hopefully you would tell him that his dignity is far greater than he realizes and that he should continue living. The argument that “wanting to go on living” is a criterion for accepting direct killing is an argument that we should encourage suicidal people to go forward with their plans. This would be a very un-loving thing to do to another human being. Unborn children also express their desire to go on living by growing, metabolizing, and adapting to their environment just like born humans. And while they cannot speak, more developed unborn children physically react to pain or attack in a way that shows their instinct to live.

Argument #4: A fetus is totally incapable of wanting to live so they aren’t human in the sense they don’t have a “soul” like we do.

There are several problems with this argument. The first one regarding “wanting to live” has already been addressed above. On the latter argument, that unborn children have no “soul” and, therefore “aren’t human”, it would seem that this is an argument from religion, not science. Certainly, science tells us that the unborn child is “human”. The law of bio-genesis tells us that human do not give birth to anything other than humans. The dignity of a person is manifest in his humanity which can readily be seen by science. Since science cannot “see” whether or not a soul exists, we are confined, practically speaking, to the realm of science in establishing what a person actually is.

Pro-lifers are often painted as religious zealots who deny science in order to push a religious belief on people who do not share that belief. In reality, we see that the unborn child is a person based on what science clearly shows us and we argue that all persons have the right not to be murdered. It is not personhood that is defined by religion. Rather it is prohibitions against murder that are fairly universally applied in all religions. The idea that man should not murder his fellow human beings is an idea that comes not from a particular religion, but from virtually all religions. Further, the implication that only those who “want to live” have souls is a claim that has no basis in any mainstream religion.

It’s nice to see that Live Action’s YouTube channel is serving to spark some debate about the humanity, dignity and value of the unborn child. Let’s hope that some day, all will understand that every individual person has dignity and value, including those persons who might be considered by some to be “in the way”. If those who claim that we should only love the “smart people” or the “happy people” or the “productive people” could come to understand that we really should just love “all people”, the world would be a much better place for all of us.