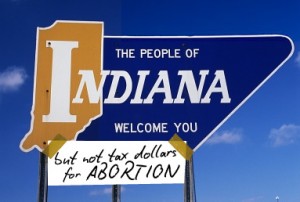 Now’s the time to Stand with Indiana!

The Obama administration has threatened to cut off billions in Medicaid funds if Indiana doesn’t relent, but state officials refused to back down on the new law, and continued defending it in the papers filed with the appeals court.

…[Indiana] argues that the new law serves the public interest in three ways: the funding qualification provision prevents taxpayer dollars from indirectly funding abortions; it advances the State’s goals of encouraging women to choose childbirth over abortion, and the informed consent requirements ensure that women who choose abortion have all the information necessary to make an informed and voluntary decision.

Live Action’s investigative videos in Indiana have been referenced frequently in the fight to defund PPIN:

Planned Parenthood of Indiana in 2008 suspended an employee after a video showed the staffer covering up a girl’s statutory rape. The video was a part of an earlier series of undercover investigations Live Action performed with a UCLA student, Lila Rose, posing as a 13-year old girl who had sexual relations with a 31-year-old man.

Be sure to sign our “I Stand with Indiana” petition if you haven’t already. We need your help, now more than ever, to keep Planned Parenthood defunded in the Hoosier State!